History of Libraries in the U.S

In 1893, the Connecticut General Assembly passed “enabling legislation” that permitted cities and towns to establish free public libraries and to allocate tax funds for their upkeep and operations. In fact, the state even agreed to award a small grant of $200 to serve as “seed money” to encourage interested communities.

In the late 1700s, the Reverend Elisha Rexford established the “New Stratford Library” at the Congregational Church on what today is the Monroe Green. In the 1860s, the Reverend Benjamin Swan revived this library for a short time. From 1910 to 1915, Mrs. Henry Habersham, wife of the Rector of St. Peter’s Episcopal Church, operated a library for the community in the brick rectory on The Green and arranged with the Connecticut State Library for a shipment of books to be sent to Monroe every month.

In the late 1940s, Vera Tracy, an employee of the West Hartford Public Library, donated books to the Stepney Methodist Church on Stepney Green for the creation of a library in its basement. Staffed by volunteers, the library was open until the early 1950s.

In November 1954, a resolution passed to establish a public library in Monroe. The next year a committee of prominent citizens was formed and, under the leadership of Dr. and Mrs. I. L. Harshbarger, spent the next three years planning, building, and stocking a new library. In 1957, six town residents were elected to serve as members of the newly established Library Board of Directors; Mrs. Harshbarger served as chairman of this board until July 1966.

The first Monroe Public Library was dedicated on March 15, 1958. The 1,000 square foot colonial style structure was built by Easton contractor Albert Krisco on a parcel of land on the west side of The Green, a gift of Mr. and Mrs. John Vernik. Townspeople donated everything from money to building materials to labor to paint to furniture to equipment to landscaping to books. The library had a collection of 4,300 volumes and was open 13 hours a week. Mrs. Billie D. Glenn served as its first librarian.

Almost immediately, a Friends of the Library group was organized to support the library and the Reverend Richard S. Martin served as first president. This Friends group still is active today. 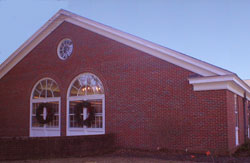 The Second Public Library is Built In the Municipal Facility

In 1968, Mrs. George B. Tyler, Jr., spoke before the Town Council to draw attention to the need for a larger library due to Monroe’s growing population. Subsequently, she was appointed to a building committee charged with overseeing construction of a new municipal government building.

The second Monroe Public Library building, occupying 8,456 square feet of the south wing of the colonial-style brick Town Hall/Library/Police Department municipal facility, was designed by Antinozzi Architects of Stratford and built on land behind The Green for $1.4 million. The entire facility was dedicated on September 17, 1972.

Within 13 years, however, the library had outgrown its space. During the next decade, townspeople voted down initiatives to expand and renovate the facility. It wasn’t until 1993 that a generous bequest from Edith S. Wheeler enabled the town to move forward with plans to build an entirely new and free-standing library.

Edith S. Wheeler was a physical education teacher for the Bridgeport public school system from 1941 to 1977. At the time of her retirement, she was head of physical education for all city schools. Ms. Wheeler moved to Monroe in 1962 and lived with her sister, Ruby, in a farmhouse on Fan Hill Road. After retirement, she volunteered in the Children’s Room of the Monroe Public Library and, for 11 years, was a regular part of activities there.

In the autumn of 2001, library officials were successful in securing a $500,000 construction grant from the Connecticut State Library to supplement the Wheeler Trust funds. On September 28, 2004, the residents of Monroe overwhelmingly approved an appropriation of $6,290,000 to build a new public library in the 2.5-acre field adjacent to the Town Hall complex on Route 111. The 32,000 square foot facility was designed by Bruce Tuthill, partner in the firm Tuthill and Wells Architects of Avon.
In March of 2007 the library opened and was renamed the Edith Wheeler Memorial Library as a memorial to the town’s wonderful benefactor and library supporter.

733 Monroe Turnpike, Monroe CT 06468
203.452.2850
reference@ewml.org
Facebook Subscribe
The mission of the Edith Wheeler Memorial Library is to enrich lives, foster success, and build community by bringing people, information, and ideas together in a welcoming environment. Adopted by the Library Board of Trustees April 19, 2018.